My relationship with Nelson DeMille 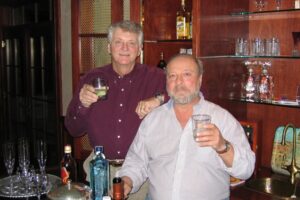 Neither one of us is counting it up any longer, but since readers will probably want a number I’ll cipher one for you: as of today, Nelson DeMille and I have been close friends for slightly more than 62 years.  Matter of fact, we both learned the beginning skills of reading and writing at precisely the same time.  We sat next to each other in kindergarten and with crayons in hand, our teacher tried to show us how to make proper letters on a sheet of paper.  Nelson got the concept right away but, frankly, his penmanship hasn’t gotten much better over the years (he should have been a doctor).  I muddled along back then, but I guess that I instinctively knew that word processors were in my future, even though that future invention was still 30+ years away.

I was a ‘professional writer’ before Nelson DeMille became one because by the time he returned from his all-expense-paid tour of Vietnam courtesy of Uncle Sam, and with his US Army Lieutenant bars, I was writing monthly columns for Flying Magazine.  Nelson had decided that he was going to become a professional novelist, so we began doing our writing stuff together, with me giving him a hand with the detective paperback originals that he began cranking out.  The pay wasn’t much, but he was published and I was learning this novel stuff, too!

Years went by with Nelson getting better and more successful with each successive book, and me providing him with editorial assistance.  Matter of fact, the plot elements for his big breakthrough novel – By The Rivers Of Babylon – were written in Nelson’s chicken-scratching on a yellow pad while he was helping me move furniture to Western Pennsylvania after the airline I was flying for closed the New York crew base. 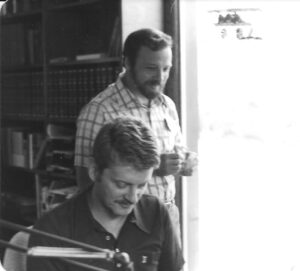 Me and Nelson, in my Pittsburgh home office, circa 1979

Our mutual helping hands were always a two-way street.  Nelson provided me with assistance in the creation of my first novel, Mayday, which went on to be an International bestseller in 1979.  Years later, we took back that out-of-print project and worked on it together.  We revised and updated it, then republished Mayday again – this time, with both our names on the cover.  That novel found a home on Nelson DeMille’s extensive backlist of stories, and it subsequently became a CBS Movie of the Week in October, 2005. 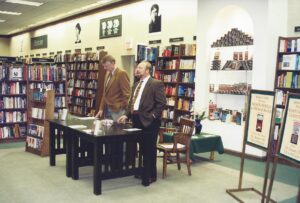 After Mayday I went on to write five other action/adventure novels that enjoyed pretty good success around the world, but I sort of drifted away from the novels and found myself concentrating more on my day (and often night) job – flying airliners around the US and, eventually, around a good part of the world.  I liked steering those big airliners around the sky. 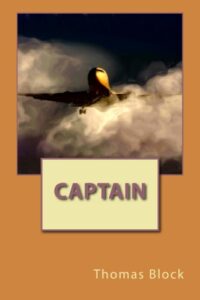 I retired from my airline pilot job in 2000, but I continued to help Nelson with his novels by being an on-going editorial assistant and technical advisor.  Spending so many hours working with him on those novels must have gotten me inspired again because I soon discovered the rumblings of a storyline in the back of my thoughts and I couldn’t keep myself away from the keyboard.  When my own writing dust had finally settled, I had created Captain – my seventh action/adventure novel (with a mere 20 years off between numbers six and seven – but who’s counting, right?).  I sent Captain off to Nelson for his overview and here’s what he sent back:

“I just finished reading Captain; it’s a great novel, I loved it.  Here’s a quote from me that you can use wherever you’d like:

‘Thomas Block is a retired airline pilot, a novelist, my co-author of Mayday and a childhood friend.  Now, after a long hiatus from writing, Captain Block rejoins the ranks of legendary pilots-turned-novelists such as Ernest K. Gann (The High and The Mighty) and brings us Captain, one of the best aviation/adventure thrillers you will ever read.

Captain puts you in the cockpit, in the passenger cabin, and at airline headquarters with an intricate and intriguing array of characters.  This novel is nothing short of the most frightening and heart-pounding Trans-Atlantic flight since Charles Lindbergh’s solo.  Or will it turn out to be Amelia Earhart’s tragic Pacific crossing?

Captain is right up there with the best of the aviation thrillers; an edge of your seat story of what happens when something goes horribly wrong when there is no room for wrong.  Captain Block knows his stuff, and it shows on every page.  Welcome aboard.’

Tom, I meant every word of what I said in that quote – it’s certainly a very good read!  Best of luck with Captain. 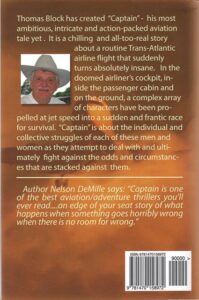 At that point I was spending time marketing Captain and also spending time helping with the finishing touches of Nelson’s newest novel, The Panther, which was released in October, 2012.  Nelson has an extensive audience that subscribes to his periodic Fan Newsletter, and the June issue of his newsletter that came out of his office had something in it that surprised me.  Here’s an excerpt from that newsletter:

“………..Moving right along, my childhood friend, Thomas Block, has written a novel titled Captain. Tom, as you may know, was my co-author on Mayday, an airline disaster novel which is available in all formats, including a waterproof life raft edition.

Captain, too, is an airline disaster novel, and Tom, a former U.S. Airways captain, brings his thirty years of flying expertise into this edge-of-your-seat story of midair terror. Captain Block is also an accomplished writer and he blends both these skills into a flight to remember.

Even though we were classmates since kindergarten, Tom is twenty years older than me, and he brings that maturity to his writing. Also, Tom is my technical advisor on many of my novels and he’s also written articles for aviation journals, and penned a number of other novels on his own, so he understands this flying stuff, like lift, drag, thrust, and why airline food sucks.

To set the record straight, Nelson is LOTS older than me – almost two years, with me being about the youngest in our high school graduating class and Nelson being about the oldest.  But that’s beside the point, since I’m certainly not going to be upset with a guy that’s been a good friend for those 60+ years.  To sum it up, let me quote Nelson DeMille again – this time, from the acknowledgement page of one of his other recent novels, The Lion:

“As in many of my past novels, I want to thank US Airways Captain Thomas Block (retired), contributing editor and columnist to many aviation magazines, and co-author with me of Mayday, as well as the author of six other novels.  Tom and I have known each other since grade school, and we used to be able to finish each other’s sentences, but now we can’t even finish our own sentences.  Nevertheless, when it comes to research and writing, Tom provides the answers to all those pesky technical questions a novelist needs to ask to give the fiction its facts.”

And speaking of facts, here’s one that I was recently alerted to: by the inexplicable and cosmic powers that come out of computers, Amazon has recently linked two novels together on a sales page by announcing that “People who bought (the pre-order) of Nelson DeMille’s The Panther have also bought Thomas Block’s Captain.”  The Amazon website even had a “Buy Both For…” price.  Now, that’s a fact that both Nelson and I can live with! 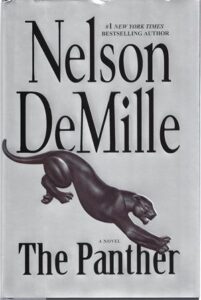 As I’ve already mentioned, Nelson’s  novel  The Panther  came out on October 16, 2012, and he has very graciously mentioned Captain on the acknowledgement page inside of that #1 bestselling novel.  Here is that quote:

“Many of my novels have benefited from the assistance of my childhood friend Thomas Block, US Airways captain (retired), columnist and contributing editor to aviation magazines, and co-author with me of Mayday, as well as the author of seven other novels.  Although Tom has retired as an International captain, he has not retired from writing, which does not require good eyesight or quick reflexes, and Tom has recently published his seventh novel, Captain, available on his website: www.ThomasBlockNovels.com.

Many thanks, too, to Tom’s lovely wife, Sharon Block, former flight attendant for Braniff International and US Airways, for her timely and careful reading of the manuscript and her excellent suggestions, as well as her keen eye for typos and bad punctuation.  Sharon’s reading skills have been invaluable to both me and Tom, as our minds tended to wander in high school English class.  What we were thinking about is another story, but we both knew we’d someday have a lady in our lives who knew how to proofread.”

Thanks Nelson – I certainly thank you, and Sharon thanks you, too.  Take it from me folks, Nelson is not only a good writer, but he’s also a good guy.  Pick up a copy of  Nelson DeMille’s newest novel “The Panther”, and also do what Nelson has suggested by picking up a copy of Captain!  You can decide for yourself which one of our newest action/adventure/thrillers to read first, but we’re both going to assure you that you won’t regret spending time with either of them.  We promise.