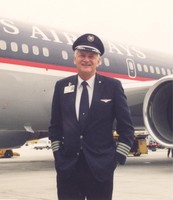 Thomas Block has written a number of aviation-oriented novels, many which have gone on to acquire best-seller status in numerous countries. His novel writing began with the publication of “Mayday” in 1979. That novel was rewritten with novelist Nelson DeMille in 1998 and remains on DeMille’s extensive backlist. “Mayday” became a CBS Movie of the Week in October, 2005.

Several of the other novels by Block include “Orbit” (a top bestseller in Germany, among other nations), “Airship Nine”, “Forced Landing” (also done as a radio serialization drama in Japan), “Skyfall”, “Open Skies” and his latest novel, “Captain”. Thomas Block is still writing both fiction and non-fiction.

Block’s magazine writing began in 1968 and over the next five decades his work has appeared in numerous publications. He worked 20 years at FLYING Magazine as Contributing Editor, and as Contributing Editor to Plane & Pilot Magazine for 11 years. Block became Editor-at-Large for Piper Flyer Magazine and Cessna Flyer Magazine in 2001. During his long career as an aviation writer he has written on a wide array of subjects that range from involvement with government officials to evaluation reports on most everything that flies.

An airline pilot for US Airways for over 36 years before his retirement in April, 2000, Captain Thomas Block has been a pilot since 1959. Since 2002, he has lived on a ranch in Florida with his wife Sharon where they board, compete and train horses.  Visitors are more than welcome to tour the Ranch website by clicking on the following link: www.FlyingB-Ranch.com

To visit the Thomas Block Photo Gallery, which includes photos from his airline and general aviation flying, plus his novel and magazine writing, Click Here.